"Where Does She Get Those Wonderful Toys?"

I think this is the most commonly asked question with the added kicker "...for those great sale prices?!"

I'll be honest. In the beginning, we just bought everthing at regular retail from the Lego store or even (gasp) Toys R Us. But that was back when we were only buying a handful of sets per year. In fact, when the UCS Millennium Falcon was first announced, I pre-ordered it at full price ($500) the same day. Unlike those who picked it up for $300 during the May the 4th event a few years later.

But now that we're focused on collecting, we've had to be more judicious about when/where we buy. Because Lego is EXPENSIVE.

Now, we won't buy anything unless it's at least 30% off. Here are some rules and websites we follow:

1. Toys N Bricks. This is an amazing site with up to the minute Lego sales and deals around the world. They also have a Facebook page - a quick and easy way to find out what's on sale and where. Their forums are interesting and I've found additional deals by reading member comments. There are a lot of other great resource sites like Brickset but in my opinion, the best bang for your buck is Toys N Bricks.

2. Stay away from Toys R Us. They mark up almost all their sets 15-20% above retail. Sometimes more. So even with their BOGO (buy one, get one) sales, you're still paying close to retail. I've only ordered from TRU a few times and that was because of sales stacking with BOGO. But for the most part, I usually avoid this place.

3. Unless you absolutely have to have it, wait a few weeks/months when a new set is released. Amazon typically has reasonable sales (even on new releases) with free shipping.

4. Target and Walmart -  wait for clearance sales which hover between 30-60% off. But go early and always, always check the seals on the box. There's been an increasing rise in in-store thefts where people pick out the bag with all the minfigures (recently, Lego has tried to circumvent this by distributing minifigures in multiple bags). The other theft du jour is when the thieves buy the set, take out the key parts, reseal and return the box to the store. We didn't check the seal on one box we bought this weekend and discovered an entire bag of parts was missing.

5. If you have a Lego store nearby, sign up for their free VIP program. Every $100 you spend, you get $5 in store credit. They also have monthly building events which are free for kids (although I saw the line for one of these things and I couldn't see where it ended).

I could go on and on about drop ship scams, Black Friday etc but this has been a huge block of text already.

One of the downsides to buying more Lego and expanding your collection is that you eventually have to make a decision: form or function? We've been doing our best to store and organize our Lego collection in a manner keeping with our decor and style preferences. Not an easy task.

A few months ago, the Lego Room looked like this (information on furniture here). 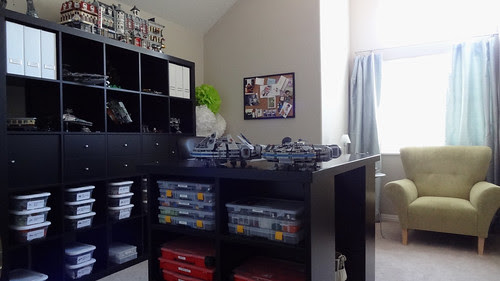 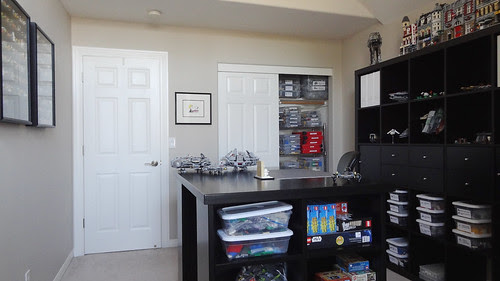 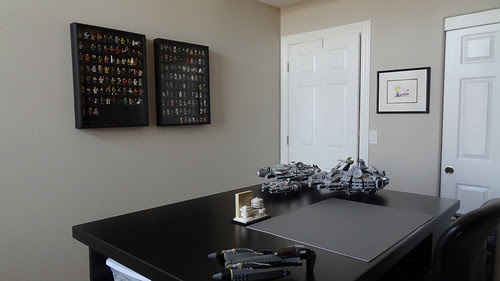 Although this looked nice, it was a terribly inefficient use of space. So, we moved the Expedit shelf into our office and bought a few Billy bookcases instead. This allowed us to expand the shelving across most of the back wall.

Ta da! There's probably a bit more room in between the bins and containers than most people would like but it makes it very easy to move things around and pull out what you're looking for. And yes, that end cap on the desk is completely filled with minifigure parts. 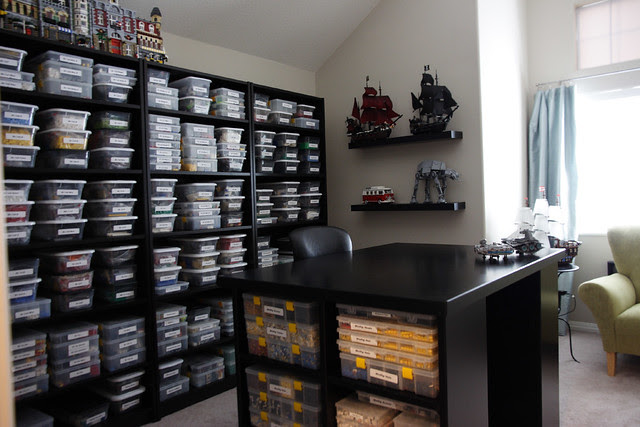 We also added some floating shelves for display purposes. Over all, it looks busier and less "furniture-y" which is a shame but this is far more useful and accessible.

The closet got an overhaul as well (details here) and this is where we keep all our completed sets - labeled with pictures, set names and numbers and then organized by theme. I miss the look of the doors but to be honest, they were a pain to navigate around. 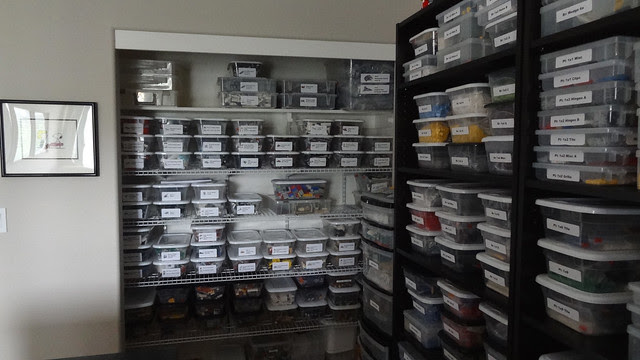 And I finally got around to building more minifigure display cases (full write up and how to guide here). But I ran out of the 2x4 black plates I use as stands so the two half full cases will have to wait. I'll have a separate post on just the display cases as soon as I'm finished. 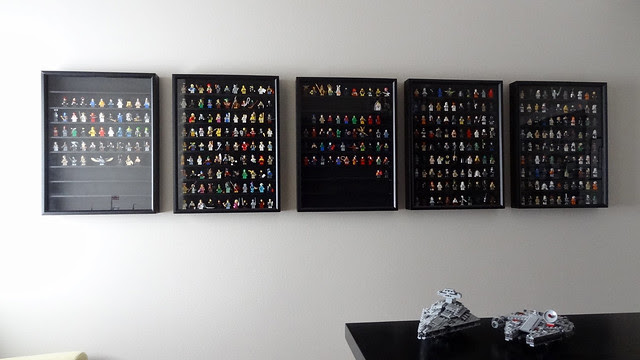 A view from the door: 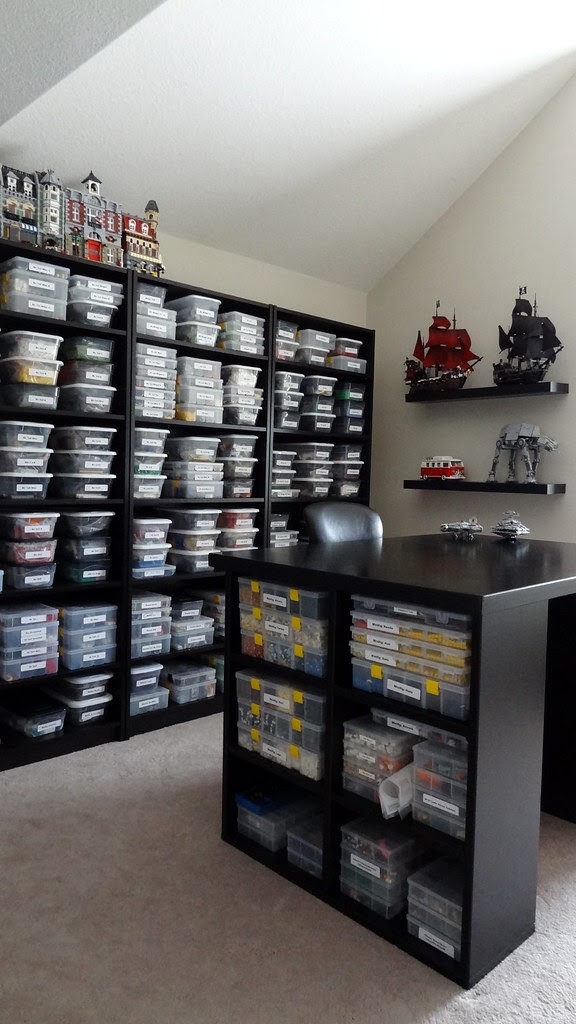 Finally, since we went on a bit of a shopping spree for the last few months, we have a backlog of sets to build. We keep the "to be built" sets in another closet and every time we walk in here, a chorus of angels sigh happily. 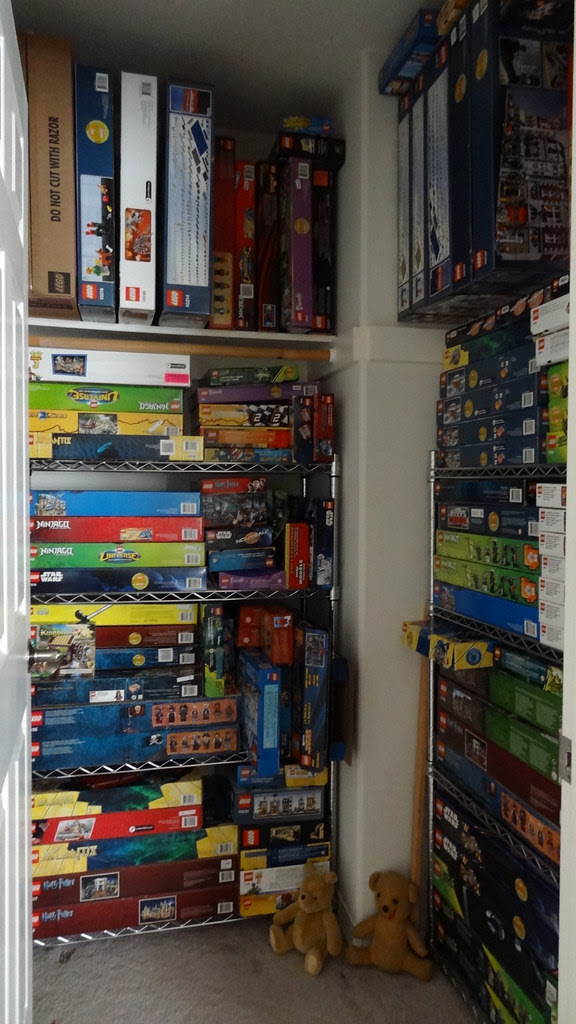 Spring Cleaning In the Summer

It's a little messy in my house right now. There's STUFF everywhere and I tend to accumulate things in piles. Normally, we don't let things get this bad but the boy sprained his back a few weeks ago and everything has taken a back seat.

I thought about posting photos but I don't want to do that until I have the "after" to show as well. Otherwise, it's just a bunch of photos of chaos.

It's a bit scary how debilitating a back injury can be. One day you're healthy, the next day you can barely stand. I did make sure there is one oasis for him ... plus, I couldn't resist the new Spring duvet from West Elm. 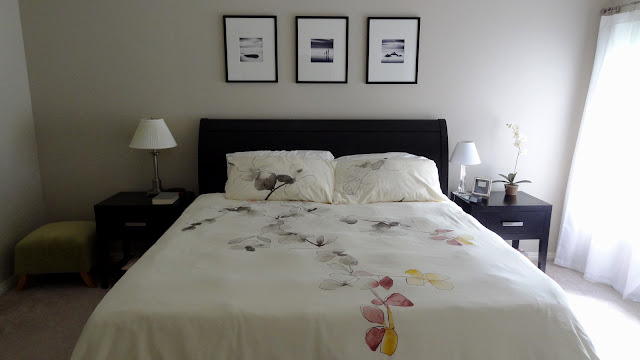