[Update 2013: The cases are complete! You can see my finished wall of Minifig cases as well as some other versions that people have made. And here's a tour of the Lego Room and its most current iteration.]

I was always disappointed that we collected LEGO minifigures and then stored them in plastic containers out of sight. I thought about displaying them on a large base plate but my nose itched at the thought of all that dust.

Ideally, I wanted something enclosed that could be hung on a wall. With a rough idea in mind, I dragged the boy to Michael's. We scored some amazing deals on shadow boxes - they were originally $64.00 each but were on sale for 40% off and we had a coupon for an additional 25% off the total purchase. Don't buy these without the coupons.

The measurements of my shadow box are 18 x 24 and approximately 2 inches deep (I checked on their website and didn't see the model and size that I bought, sorry!). Also double check each case even if they're from the same manufacturer. We noticed a half inch discrepancy in one of the cases and had to take it back - it was very noticeable on the wall next to the others.

[Check Michael's website for weekly coupons. They routinely have coupons for 40% off one regular item.] 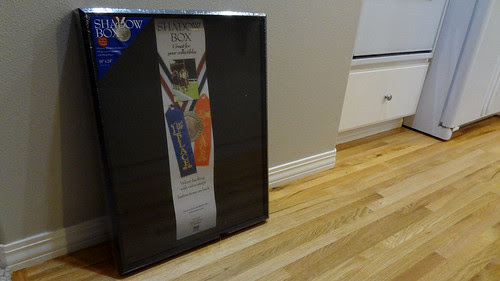 James originally wanted to build the interior with just LEGO but that approach needed multiple support columns. I wanted a cleaner, open look which required custom shelves. We wandered around Home Depot for a while until we found these. Perfect! 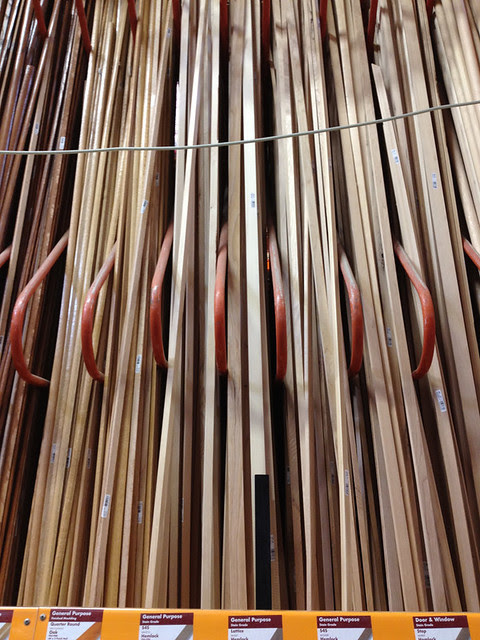 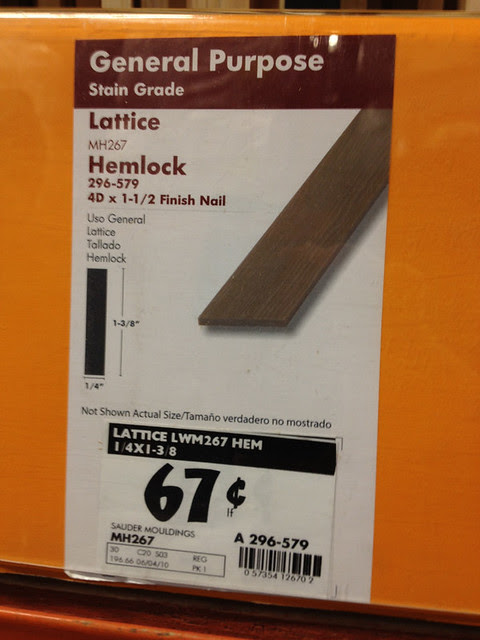 For our first set of cases, we had Home Depot cut the trim to size - the cutting service is free and they will cut almost anything for you as long as you buy it. Stack multiple pieces of trim on top of each other for cleaner cuts because the piece on the bottom will be splintered. 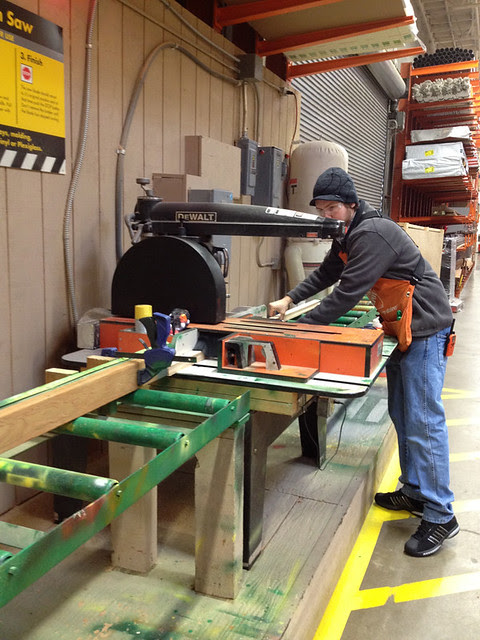 I recommend you measure each piece while you're at the store, just in case things are off. We had to get a few re-cuts the first visit. 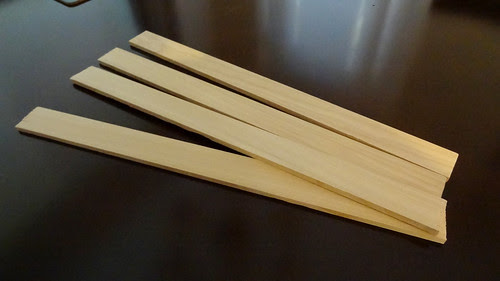 After sanding (lots of splinters!), I spray painted the wood with Rustoleum Satin Black - all purpose paint. Two coats and remember to get the sides that face the glass. There are 8 shelves per shadowbox with the bottom of the case serving as a row.  This was actually the longest step - literally waiting for paint to dry. With a few coats of black spray paint, the "shelves" blended right in with the case frame.

I started off using primer which you can see in the photo below but got lazy and skipped that step for the subsequent cases with no noticeable difference. 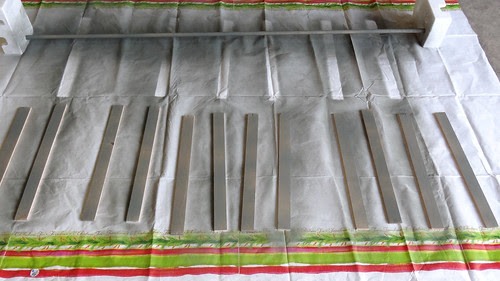 We decided to use LEGO bricks and plate along the side as support columns. Each shelf was 2.35 inches high - for light saber clearance etc, you know, important stuff - except the bottom and top shelf, which needed slightly more room for the bigger minifigures like Hagrid or General Grievous.

Each column contained 5 1x3 bricks, 2 1x3 plates and a 2x3 plate for the shelf to rest on. You need 2 support columns per row - one on each side. We didn't have enough black bricks and plates to build more than one case so we ordered the rest on Bricklink.

In order to secure and stabilize the columns, I used some scrapbooking adhesive called ZOTs to stick the bricks against the side of the case and also the shelves to the 2x3 plate. I love this stuff - it's acid free and while quite strong, it's not permanent. Here's one column ready to be stuck inside the case: 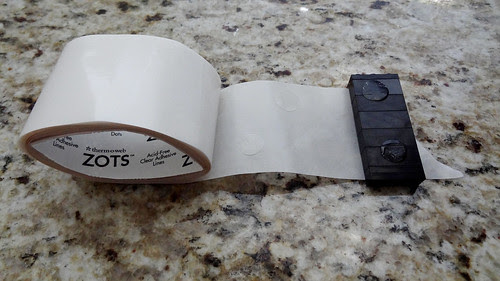 If you're really compulsive, use a level for each row because if the bottom row is askew, you'll keep building on top of it.

After we started this process, I did a Flickr search and saw that someone had used a similar approach - although he used all LEGOs to build his shelves. 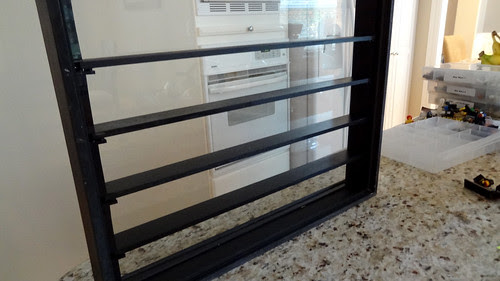 I placed each minifigure on a 2x4 plate (or the stand included with Collectible Minifigures) also secured to the shelf with two ZOTs.

[Update 2/22/2015: I stopped using the ZOTs because they weren't as secure as I would like and they wiggled around. So, I switched to double sided mounting tape (like the 3M Command strips) and cut it down to size. They're much more secure. You can buy rolls of them at your local hardware store - opt for the thinnest ones.]

Use whatever spacing you like to make sure they're not too crowded. For my cases, each shelf holds 11 minifigures and with 9 shelves, that's a total of 99 minifigures per case.

We were at odds at whether or not to display everything. The boy wanted unique models, otherwise, we'd have rows and rows of Stormtroopers, droids and Rebel fighters. Originally, the cases looked like this ... but it looked busy and chaotic. 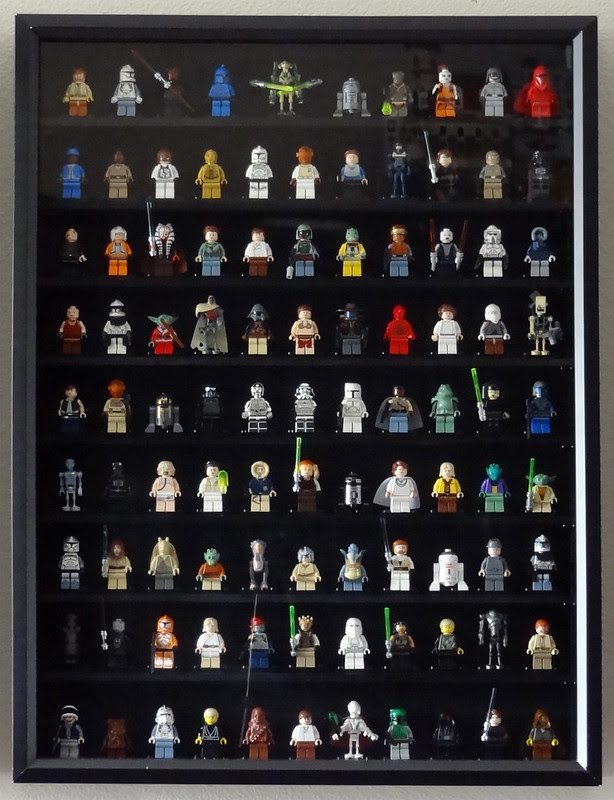 So, I tried grouping like minifigs together. That boring case we were worried about ended up looking like this: 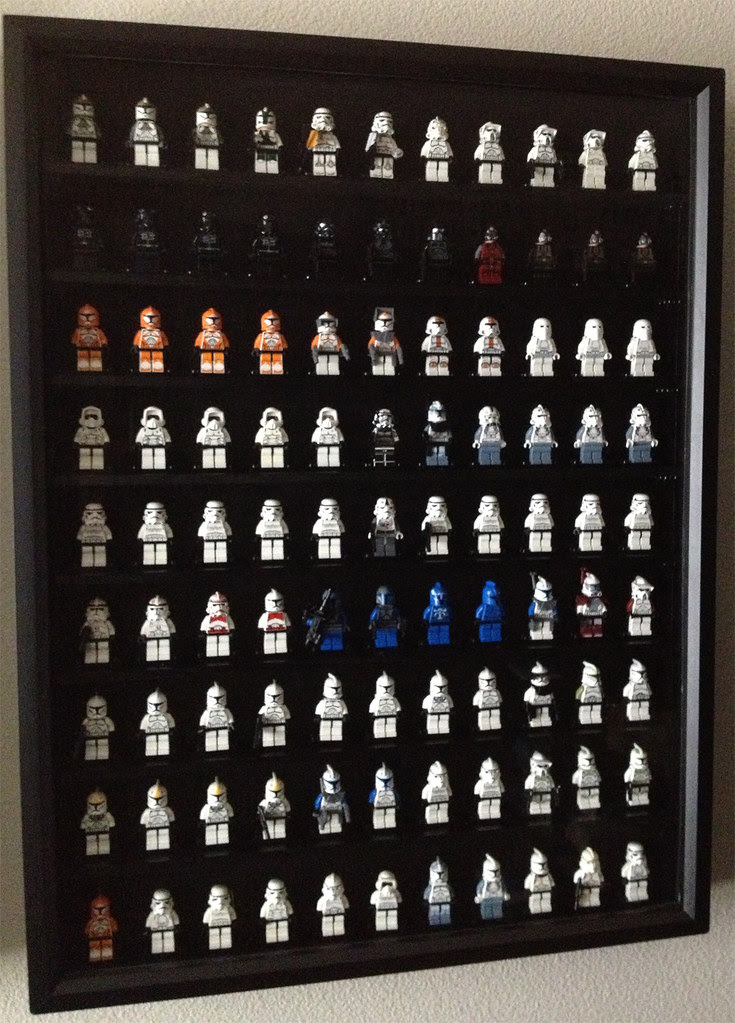 Amazing!! This approach requires a bit more work since we're always opening the cases and rearranging things as we get new sets.

And remember my craft studio? I converted it to a LEGO room and sold all my scrapbooking supplies. And then the AT-AT moved in. 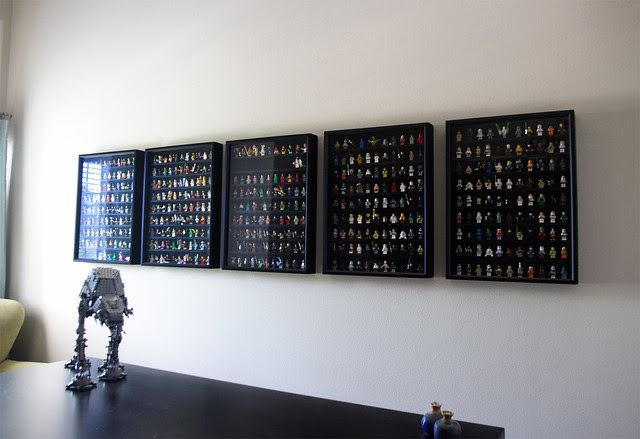 1. I wish I had bought front-closing shadow boxes (think Aaron Brothers may have some) - this would make accessing and switching the minifigures so much easier. Also, great for kids who want to play (gasp!) with the little guys.

**Update: I made some additional cases with the front closing shadow boxes. They're a little bit smaller but the ease of access is perfect. 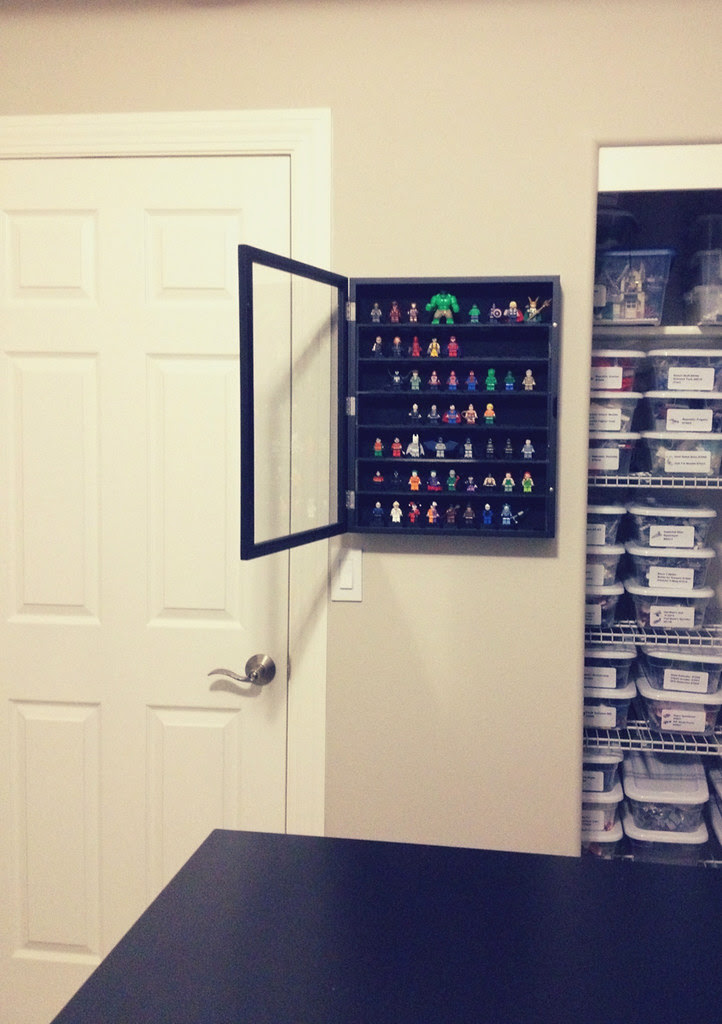 2. I made these cases vertically but horizontally looks just as good and would use up less materials - less bricks, plates etc because of less rows.

3. Move the minfigures as close to the glass as possible. I moved these guys one stud closer and they were a lot more visible.

4. Be prepared to buy a lot of Lego minifigures.