Being sick for the last month has forced me to stay at home in the evenings which has had a surprising upside: I can watch the Winter Olympics. Usually, the Olympic schedule is too overwhelming; I never have time to watch a fraction of the events.

I can't even remember the last time I watched the Winter Olympics. I think I was still a teenager. Certainly, there weren't any events featuring snowboarding. And how entertaining is the snowboard cross and half pipe!? Love it! Although I think they should have the women's half pipe event BEFORE the men's and definitely before Shaun White does anything. 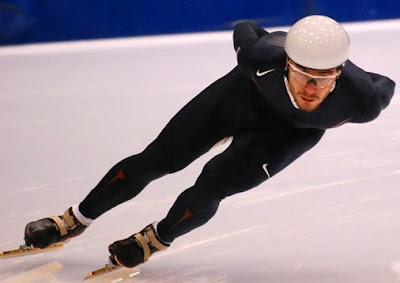 Photo from US Speedskating

I have to get braces again. Apparently, the first round of braces (and jaw surgery) was... how shall I phrase this politely... incomplete.

Once again, I have muscle spasms and headaches and in order to align my jaw properly, I need braces. Again. But with an added bonus of a new torture device called roof bars. These metal bars curve against the roof of your mouth and hook onto the back molars. Incredibly invasive and annoying but excellent for catching food and rubbing one's tongue raw.

I have the roof bars in right now and scheduled for the brackets in a few weeks. My current unhappiness/discomfort/anger level is at 9.5.

I just don't think I can do this again.

Update: They're coming off on Monday.

Picture of the roof bar after the jump. Don't worry, it's taken on a model set of teeth and is only marginally icky looking. I think. 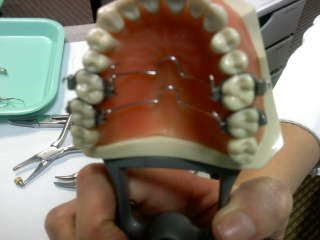 We've both been on a healthy eating/gym kick lately (well, at least I was before I got bronchitis that practically morphed into consumption). James wanted to expand his vegetarian menu to include more home-made dishes. So, he poured over a few recipe books and selected one to try: Green beans with roasted peppers and mustard butter.

Normally, I would have helped him but since I couldn't even speak without coughing, he was on his own.

First, he started off by grilling the red peppers. Which created a cloud of smoke which in turn triggered a massive coughing fit. I ran to the bathroom and shut the door. After 10 minutes of coughing so hard that it caused a nose bleed, I peered out to see every window wide open and a very apologetic boy.

After he assured me the grilling part was over, he continued with the cooking process. Time to blanch the green beans. Caught off guard, there was a mad rush to prepare the ice water which resulted in flying ice cubes and an "oops, ripped my pants".

The next step involved roasting some mustard seeds. "Mustard seeds. I have never cooked with mustard seeds," he mumbled which should have been a clue. Seconds later the scent of burning mustards seeds preceeded the mushroom smoke cloud.

This time, I took refuge in our bedroom until the coast was clear.
Posted by Toki at 4:38 PM 1 comment: