That there are photos like this. Where the hair is beyond perfect and the shorts are almost non-existent. And his smile is still his smile after 28 years.

Yesterday the boy called me from work with the suggestion that he take the day off. But what would we do? We threw around a few ideas until I said, "Lego". And then we were on our way.

For Christmas, I received the Green Grocer which is just an amazing blend of doll house/Lego. But I dragged my feet and hadn't even opened the box ... until I realized that we always, always do Lego together. So, we drove down to the Lego store to get something for James, picked up the Republic Attack Shuttle and spent the rest of the afternoon in our respective Lego worlds.

It's not the sexiest looking ship in the Star Wars collection but the Attack shuttle has tons of interactive pieces: missiles, torpedoes, etc. 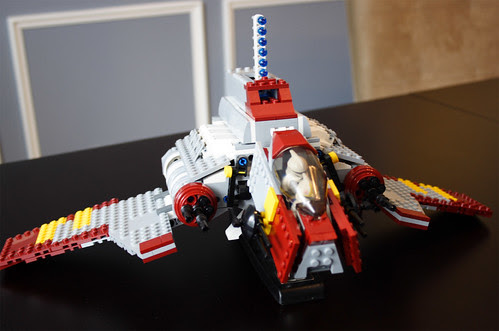 Here's the inner bay with the weapons rack and green torpedoes that auto advance after you drop one. These little things seems to really impress the boy. 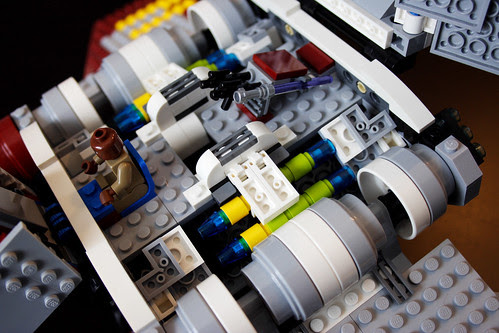 Meanwhile, in another galaxy, a little market was coming together nicely. I only got the first floor of the building done - what can I say? I'm a slow Lego builder and that was with some assistance from a very anal-retentive Lego sorter. It's not missiles or bombs but look at all the little fruit! And the mailbox in the far right! Too cute!! I think I played with the mailbox and envelopes for a good 15 minutes. 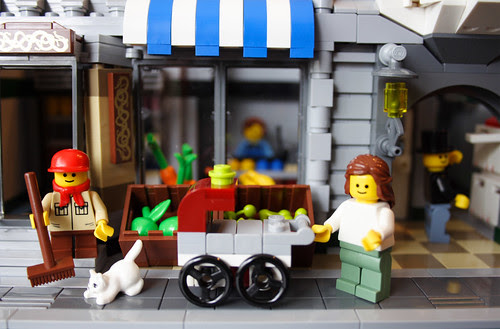 Alas, peace was short lived. Unfortunately, it seems that the Star Wars lego contingency in our house is rather a violent one so it wasn't long before the Attack shuttle started flying over head and dropping bombs on the market.

A banana is no match for a light saber. 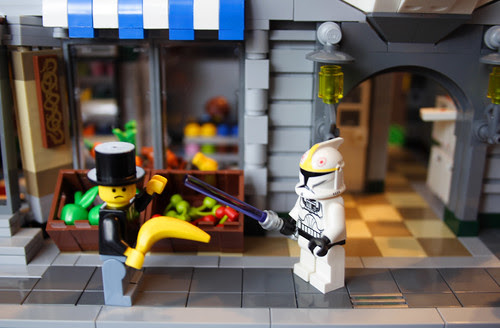 Let me be very clear. I hate running. I have never, ever enjoyed running and always detested it. Flashback to elementary school. Back in the 70's and 80's, we suffered through the joy of the annual "Canada Fitness Tests". A grueling trial of situps, pushups, flexed arm hangs, 50m dash, etc and of course, the dreaded endurance run. Based on your age group, there were pre-determined fitness levels that you had to hit in order to receive a bronze, silver, gold or excellence medal in each event. If you sucked, you got a plastic participation badge. Awesome.

I always tried my best until the endurance run. I'm not sure how long it was - I'm tempted to say about 100 miles but I'm pretty sure that's not correct. Anyways, I always ended up walking that event as a means of saying "F@ck you" in my 8 year old way.

Ever since then, I've had a hate/hate relationship with running. But secretly, as I passed an early morning jogger while sipping coffee in the comfort of my warm car, I'd feel a twinge of envy.

But this year, I'm going to LEARN to run and I found this Couch to 5K program that should help. Granted there are easier and less painful ways to get fit (which I'm doing as well)... but running has always been my nemesis.

I went out yesterday to test the waters ...

Now I make funny noises as I laboriously climb up and down the stairs. A good sign indeed.
Posted by Toki at 8:50 AM 4 comments: