It's weird. Like clockwork, every October, a slew of candy beggars show up at our door.

Ooooh nostalgia.... We used to go all out for Halloween when I was little. We'd have groups of kids who'd scout neighborhoods and report back who had the best loot. And multiple costumes so we could make the late night rounds and pick up all the left overs. For 8 year olds, we had quite the racket. I also recall "distributing" the candy my brother and sister brought home. Ahhh... good times.

Alas, Fizzienub isn't able to share the walk down memory lane. He wasn't allowed to trick or treat as child, since my FIL (who is hilarious!!) considered it extortion. I can see that.... "gimme candy or I'll have to trick you! Muhahaha". Yup. Text book extortion.

So, for very different reasons, we tend to go all out with the candy. Last year's goodie bags were a huge hit but took way too long to put together and were too expensive.

This year, we just threw down the big bars.

May I just say that we started out with 60 bars on Saturday and we were down to about 37 this morning. In fact, I had to go buy extra bags of chocolate for the kids just in case we ran out. I'm not pointing any fingers but my husband ate 23 whole chocolate bars in the last 4 days.

Curious George
Originally uploaded by Toki~
It's fun to see what costumes are popular in little kid land since we don't have any rugrats ourselves. The last few years, the Incredibles and Spiderman were very big. This year, Superman Returned! And a lot more skeletons and even the Grim Reaper himself.

My favorites are the little tiny ones that barely make it up the steps unassisted and are almost always outfitted in big, adorable poofy costumes.

I think I have next year's costume for the boy all planned out.
Posted by Toki at 8:03 PM 10 comments:

We've been invited to a Halloween costume/erotic ball (but then again, who hasn't?!). I haven't been really interested because I dislike wearing costumes or spending a bunch of money to rent/buy something I'll wear once in my life.

However, if I could wear something like this, I'd be all over it. 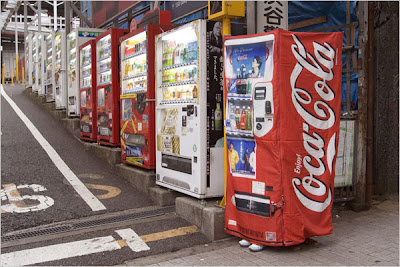 You can read more about the Vending machine skirt and the brilliance behind this concept. Apparently, she got the idea from ninjas and how they blend in with their environment. May I just say how useful this sort of thing would have been while I was working?!

Back to this party/ball thing. Our friend Kathy is coming over tonight to help find us some appropriate costumes that won't cost an arm and a leg and that won't offend my delicate sensibilities.

It should be interesting.
Posted by Toki at 2:33 PM 3 comments:

Look What I Can Do!

Another gorgeous, sunny day. When the sun shines here after mid-October, you learn to appreciate it.

It's been a perfect Tuesday afternoon. After spending the morning cooking and baking, I now have a nice, clean kitchen. Sooooo peaceful...

That is until my cat came to find me.

There's something you should know about the cow cat. He has this nasty little habit of tracking me down wherever I am ... in order to lick his butt in front of me. It doesn't matter where I am, he'll find me.

I was drinking coffee and enjoying the sun when the cat sauntered in, plopped himself right NEXT to me on the couch and proceeded to do some yoga. 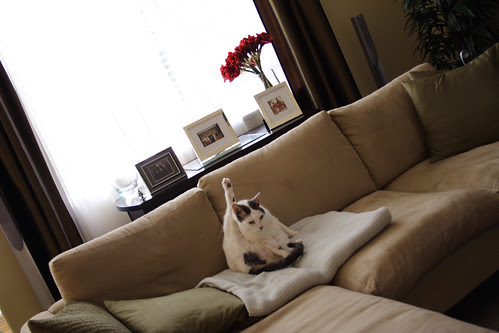 My husband thinks this is amusing.

[ed. As an aside, isn't this picture completely disgraceful?? It's got a certain Britney'esque quality about it, don't you think?]
Posted by Toki at 3:34 PM 12 comments:

The vacuum rant yesterday reminded me that I haven't had much to complain about lately. Which is a good thing! Life has been pretty darn amazing now that my crazy work situation and the horrors of incredibly invasive jaw surgery are behind me. So, I've been coasting along on a sea of hobbies, fun times, cooking/baking, redecorating and entertaining.

However, we're currently in the process of repairing and remodeling our master bathroom. And I'm the one interviewing and meeting with potential tilers, plumbers and contractors. What a mess.

The bids are all over the map, fluctuating by thousands and thousands of dollars depending on who you're talking to. Don't even get me started on the guys who brushed things off with "we don't need a permit". Excuse me? Get your shoes back on and peddle your slum building sleeze somewhere else.

Maybe it's because I'm female and these construction types think I won't negotiate or figure out what's the standard rate and discover I'm being gouged for additional 40%? Seriously, for that much extra money, I expect the bathroom to fellate my husband each time he brushes his teeth.

We're getting an outhouse with a hose.

Those crappy tiles and horrible metal-framed shower have got to go!
Posted by Toki at 4:43 PM 5 comments:

Finished last night! Instead of my usual write up, I've decided to interview the builder.

1. What was your initial reaction when you found out that Lego was releasing the super gigantic version of the Millenium Falcon?

Extreme happiness.
[At this point I stopped and asked him if all of his answers were going to be one or two words long ... which would make for a pretty boring interview.]

2. You must have been rather impatient waiting for it to arrive. How long did you have to wait?

I had to wait 7 months and it was agonizing. About once a week, I would log in and look at the pictures.
[Towards the last week, he would call me at least once a day to ask if it had arrived yet. Drove me crazy.]

3. And what went through your mind when you found out it had arrived?

I call this photo: Anticipation. 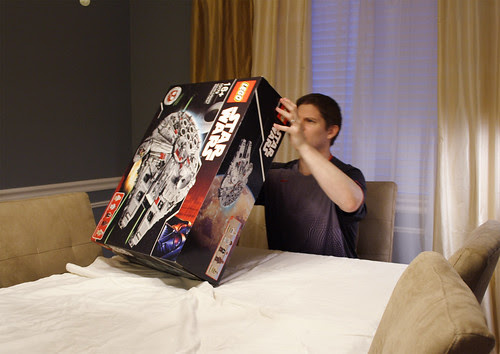 [He directed a snotty glance in my direction before snorting...]
I don't know anything about opening the box. I was wondering if it would be set up the same way as the Imperial Star Destroyer.
[What he doesn't remember is that there was a lot of Ooohing and Ahhhing when all the bags tumbled out.] 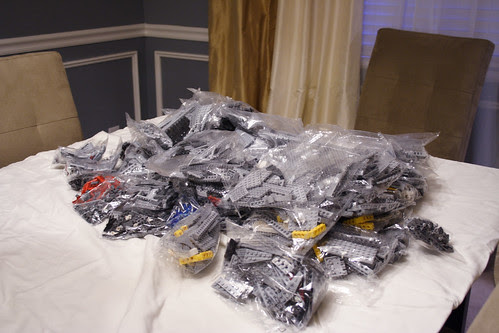 Well, I knew that if I left it all in the bags then it would be too hard to find the pieces. It took a lot of time but it was worth it and it was kinda enjoyable in itself. 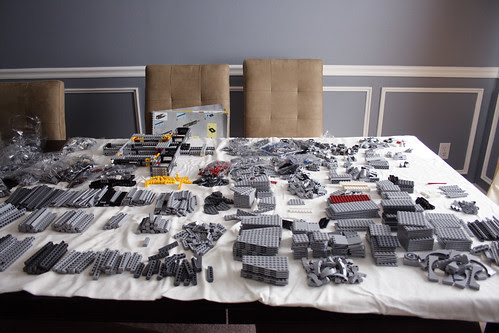 The ship in progress: 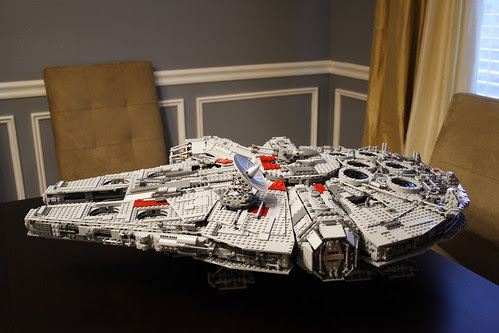 Millennium Falcon: Front view (can you see Han Solo and Chewy in the cockpit?) 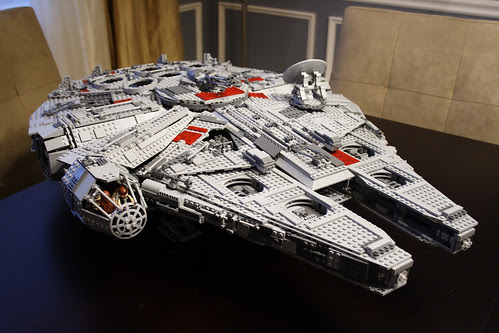 6. So, what do you think now that you've finished?

It was fun. Umm. My fingertips are sore. It looks great and was well worth it. I'm kinda sad that it's done - it was 7 months of waiting and 2 and half weeks of building. And now I'm going to have to wait 2 years before the next UCS comes out.

7. How awesome is your wife?

Phenomenally awesome.
Posted by Toki at 9:57 AM 7 comments:

The boy called me as I was fiddling around in WoW. "There's an amazing sunset - let's go for a ride."

So I left this sunset...

Photography For Dummies: The Sequel

I should probably buy some books on digital SLR photography and maybe even a how-to guide on Photoshop but that's not my style. If I can't suffer through a million trial and error attempts and then finally google it in frustration, it's not worth doing. Yup.

It's a good thing the internet is full of helpful and knowledgable people. Thanks to fellow bloggers, I take all of my photos in P mode and in a RAW format. It's the best way to manipulate the white balance, exposure data etc.

In order to illustrate the practical application of my edu-ma-cation, I'm going to use my favorite model: the Sprinkle donut.

This is what the original RAW image looks like. I don't use flash because it washes out the colors. And even with a kitchen full of light and 2 side lamps, all of the photos came through with this yellowish hue. Probably because I'm using incandescent bulbs. A big no no.

Then I imported the photo in my RAW image editor and went to town on the white balance and brightness. Much of the yellow hue is gone and it's much brighter. This is the photo I originally posted when we got our 2nd bucket of donuts ... naively thinking that this was as good as it got.

Now that I look at it, I think it's got a pinkish-red undertone.

Enter Photoshop. Today I found out about layers and curves. After fiddling with the above photo for a bit, this is what I ended up with. The pink is gone and the colors just pop. This is very, very close to what it actually looked like: a bright jewel of an artery-clogging treat.

Also, regarding the poll.

I am completely dumbfounded by the preliminary results. I had no idea that so many people slept naked! I'm betting it's all men. Yup.
Posted by Toki at 6:37 PM 5 comments:

What Do You Wear To Bed?

There's a poll on the left.

The boy and I had a late night conversation about this and I have a feeling what the majority answer will be.

Yesterday I went sports underwear shopping with the boy and was amazed. The diversity in marketing approaches for the same product was very ... noticable. Perhaps they're selling to a different audience?

Take for instance, Fruit of the Loom. A fairly sensible, no nonsense brand - something a man would buy for himself. Their approach: simple drawings of the boxers and briefs.

Jockey is a fairly no-frills brand too. And although they had models on their packaging, it was a very streamlined look (see the model on the left). No obscene, over-the-top bulge here.

I wanted to buy the Calvin Klein underwear.

I think we found their audience: "If I buy my husband/significant other these boxers, he will look exactly like the picture". 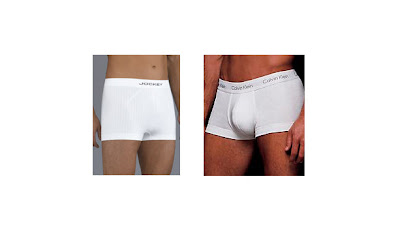 We got the Jockeys.

I believe that when female asian babies are born, they are immediately inundated with Sanrio images. This is further compounded by a perpetual onslaught of cutesy, cartoony toys, games, school supplies and even clothing during our formative years.

And while I think this happens to some degree in other cultures, it is most prevalent and most successful in Asia (Japan, Korea, Hong Kong, etc).

It is the only reason that can explain why I covet this bag so much. COVET with a burning, white-hot passion.

Don't blame me. I've been programmed this way since birth.

Someone buy me this bag.