Yesterday the boy and I celebrated our 7th wedding anniversary.

Hooray!! Who knew that a tawdry encounter between two self-absorbed people focused on playing the field would ever turn into something lasting and sickeningly sweet??

My super amazing husband was very thoughtful - knowing that I would be both tired and stressed out from the worst business trip of my life, he went for something low-key and vegetatively fun.

For dinner, we went to Portland City Grill and my table had a lovely arrangement of roses and orchids! I'd been craving oysters so I ordered some on the half shell. Errr. The first one was fine. But I didn't notice that the second one had an odd smell to it until it was already in my mouth and halfway down my throat.

Hmm... I made him smell the shell and this is what we came up with: it smelled like something rotten mixed with vomit.

So, we called our waiter over and made him smell the oysters too. I think he stood here for a good 5 minutes smelling our oysters over and over again until I made him stop because it was just getting silly. He and the chef assured me that it was normal for some oysters to be more pungent then others and that I would not get sick... and I didn't but that taste/smell will not soon be forgotten.

As a necessity, we HAD to run over to Voodoo donuts to wash the stench from our palates and nostrils.

Then back home for more Battlestar Galactica!!

Also, in lieu of traditional gifts, we bought a new painting for our bedroom. It's HUGE (40x40) and it balances that huge wall opposite the window. It's hard to see the artwork clearly in this picture and I tried several times to capture how vivid the blues and greens are but ... alas even my newly found camera skills are no match for the glare of light on non-coated glass. 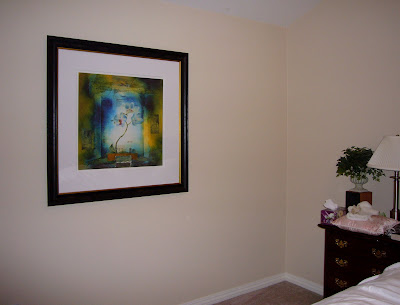 In the next few days, we'll have our new nightstands. A few more pictures and finishing touches and the bedroom sanctuary will be officially complete.
Moral of this story: Say no to oysters that smell.
Posted by Toki at 6:54 PM 9 comments:

The home re-model adventure begins. First off, the master bathroom. All that needs to be done is some minor repair work but ...

It's not a bad bathroom and I actually quite liked it when we first moved in [ed. I'll post a picture of it tomorrow because we left my spiffy new camera at the paint store - luckily, they found it and put it in the safe for us! Hurrah for people who don't steal!] but now I just see all the stuff I dislike. Like the blah color tile, the shower doors, the carpeting, the crappy toilet (heehee).

So we're going to remodel.

Step one - should we get new faucets?

Option 1: This is what we currently have. We both dislike the brass but Fizzienub also dislikes the rims and detailing on the bottom.
Pros: It's free and not horrible.
Cons: We're not thrilled with it. 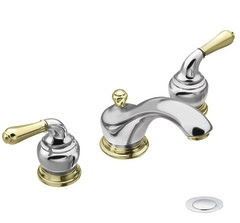 Option 2: Same faucet but now in a chrome/brushed chrome look.
Pros: It looks better.
Cons: Expensive to replace all the fixtures in the bathroom to remove just the brass. 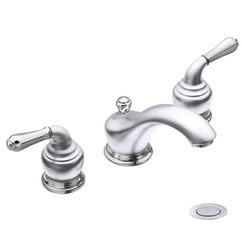 Option 3: Something completely different and lot more sleek.
Pros: It looks good.
Cons: Expensive to replace all the fixtures in the bathroom and will need a new set of valves to boot. 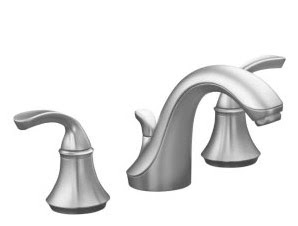 Technically, we don't need new facuets and if we do decide to change them, it'll be for both sinks, the bathtub and also for the shower... See how these things add up?

But if you're going to re-model, why bother doing it half-assed?
~~~

Since I was rather disappointed with the blahness of some of my photos, I decided to read the manual. Apparently, there are reasons for all those multiple modes, exposure settings etc.

And then I put my knowledge to the test. I needed a subject matter with bright, contrasting colors for an extreme close up shot in a room with only natural light. My house is not very colorful but luckily, I hadn't put all my Christmas decorations away... so this is what I selected as my objet d'art.

100% un-Photoshopped. It's very, very close to the actual thing. I uploaded the actual photo size so it should be clickable. Be forewarned ... that's a lot of color!

Imagine that - a manual being useful!
Posted by Toki at 5:55 PM 4 comments: