The whole notion of a budget and all the crap that goes with it just sucks, in my not so humble opinion.

Why can't I live beyond my means? Why must I track my spending habits and curtail them? On that note, why can't I just subsist on french fries and ice cream without gaining weight? Why can't I live life as an undisciplined child? /whine

So, our financial advisor tasked the boy and myself to put together a budget - especially since I want to "retire" and become a slumlord/house elf. I itemized all of our current monthly expenses in one column and proposed expenses in another. Here's what I learned:

We spend too much money. I can see why financial pundits are forecasting doom and gloom for most Americans. We are a nation of spenders. Not savers. The best thing to do is get your savings/retirement funds taken out of your paycheck before you get it. That way, your stupid spending habits are thwarted. I had to do that to myself.

Now that we have a budget in place, here's the hardest part - sticking to it.

Our biggest expenditures per month (aside from mortgage and car payments) - eating out and lego.

*Cough, Cough* I Am Not A Cylon

Whatever this thing is that's going around, I caught it. Who knows if it was in "Misery", on the plane, at my work or if my beloved husband brought it home from his office. What I do know is that I've spent the last week and a half with a burning sore throat, racking cough and sinus congestion so bad I thought my head was going to explode.

In fact, it was the first time I've ever gone to work and had everyone yell at me to go home.

Yay! Thank you, Seasonal Flu and Cold. I didn't get any time off per se since I did all my work from home, but it was nice to skip the whole commute. Also, tedious meetings go by a lot faster when you can put yourself on mute on the speaker phone and do a bunch of work.

Unsurprisingly, my productivity last week was through the roof. Now that I'm back in the office, I've had 3 meetings and 4 conference calls. It's 1 pm.

The boy and I got sucked into the 2nd season of Battlestar Galactica this weekend. We watched all 6 DVDs in a span of 2 days. After our epic couch session, we had gained a few pounds and a headache. I didn't like how they jumped ahead 1 year into the future. I know it was probably necessary for plot development but still, I think it's a cheesy, sellout move.

Anyways, now we need to get caught up on season 3. Hmmm. Wait until the DVD release or try to TiVo them and watch them in chronological order?

Though I find myself rather distraught over how much some of the actors have aged. For example, John Heard as the 3rd replacement commander of the Pegasus. Who is John Heard? He's the only significant male actor in the uber chick flick, Beaches.

But among those who are still young and hot... this guy is smokin goodness. 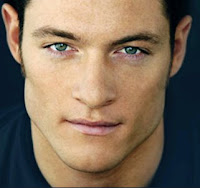 Mmmm... Yumm. Look at those lips. Seriously. Hellooooo Helo. I'm all over that.

Or Misery as I've heard it pronounced.

Here are the stats from my 3 day trip:

12 hours of flight time
3 hours of delays
21 hours of meetings
4 hours of sleep
2 cups of coffee (which was a bad idea since caffeine gives me palpitations)
437 new emails (10 of which I read and answered)
15 voice mail messages (5 marked urgent)
6 Tylonels
Posted by Toki at 11:37 AM 4 comments: