So, it snowed last night ... and this morning. It's still snowing, actually.

Nothing I'm not used to growing up in Canada. But here's something that I am definitely NOT used to - driving in the snow. And another plus, my BMW is rear wheel drive.

Rear wheel drive + snow = Anti-lock brake and skidding hell. I started out this morning around 7:30. I went a mile without any problems (this was going downhill) and then I turned the corner. Going downhill still wasn't a problem, the opposite side however, was another story. About 5 cars in total were in various stages of stuck: getting stuck, will be stuck and totally stuck.

I felt the first flash of trepidation.

Still moving along nicely until I reached the bottom of the hill and started driving back up. UP is bad. Stopping on UP is even worse. Once I stopped, I wasn't able to start again. I skidded sideways and the brakes completely locked up. I think I was perpendicular to the road at one point.

Some good samaritans pushed me up the road ...

I pulled over into a quiet neighborhood to get my bearings. I had hills on either side of me and no forseeable way to traverse them with the giant hunk of junk that is my car. (yes, I am disgruntled with my baby at the moment, she totally let me down).

I decided to go back and tried to turn around. But guess what? I'm on another HILL. Fast forward 20 minutes later. I drove in reverse all the way down the hill, turned around on level ground and tried to go back up again. No good.

So finally, after much debate, I parked the car along side the curb, threw on my running shoes and began the 2 mile hike back home ... uphill...in the snow.

Here's what I passed along the way: 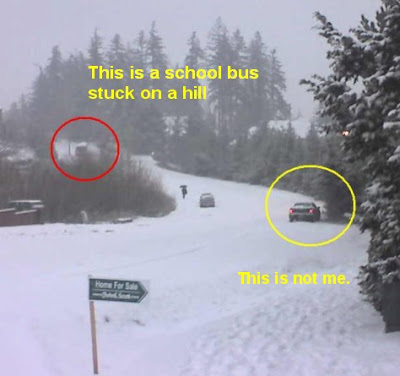 Even with such minor grades, these hills were near impassable for any car without 4WD or at least front wheel drive. 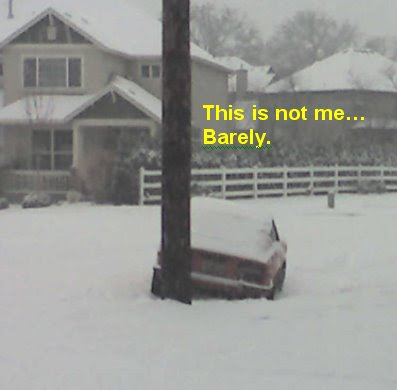 This was scary - I saw this car slide backwards against this pole very slowly while I was still driving to work. I took this picture on my way back home - on foot. 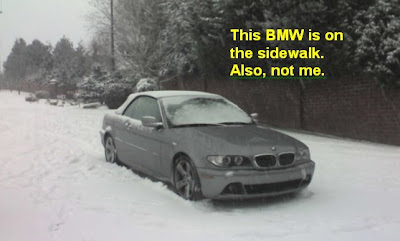 This car was blocking my path - stupid BMW drivers! They're all total jerks thinking they own the road and sidewalks. ;) 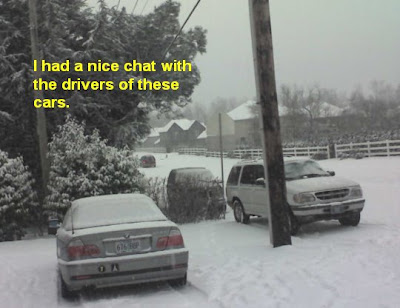 Not even the larger cars were exempt from the snow.

So, after 45 minutes of trudging in the snow, I finally made it back home at 10 am, completely soaked and sore. Sore from falling a million times because snow, ice and slick running shoes are not a good combination.

Work is trying to find a way to get me into the office. Apparently, it's very important that I attend a meeting. *sigh*. Also, we went to Gamestop last night. There was a ridiculous .. and I mean RIDICULOUS line and it was about 20 below so we left. Which means, I'm at home without Burning Crusades. Ah the irony.

Part of my resolutions involve healthy eating - which includes drinking gallons of water every day. So I got a new water bottle. It's a lovely pale lavender-pink color. Unfortunately, my stupid phone takes horrible color photos so you can't see the true pale pinkieness. 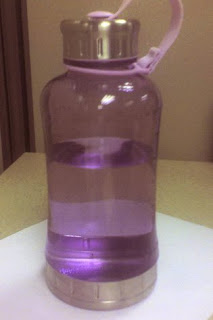 It makes it much easier to drink the 64 oz of water every day. I tell the boy about three times a day just how much I love my water bottle. Poor boy.

This is Q's water bottle. He claimed he would deny ownership but those who know Q, know that this just screams of Q-ness. 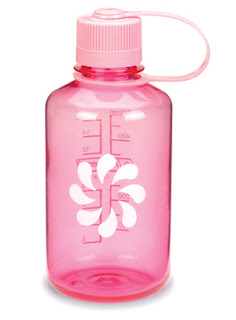 So, what to roll for Burning Crusades.

I think I'm going to try the Paladin. Though this changes daily - along with my motivation and desire to level up another character on a pvp server. And sometimes, this game is more headache than fun.

Fizzienub is going to level up a Blood elf Hunter. Yes, a hunter. This is his 5th one. Not one has made it past level 36.

Music for the Commute:

Only a week and a half into bumper to bumper traffic commutes, I am the poster child for road rage. So the boy went and burned a CD with all of my favorite 80's music.

How angry can you get when you're listening to "If you leave" by OMD? WOoooooo. And Paul Young's "Everytime you go away"...
Posted by Toki at 1:45 PM 15 comments: