After 8 hours, I arrived in WI last night. Unfortunately, my suitcase decided to stay and party in Chicago.

You would think that after years and years of being in business, airlines would have figured out simple things like how to take a suitcase from point A to point B. I've heard the statistics about how 99.2% of all luggage gets to their destination without any issues. Uh huh. This has happened to me 3 or 4 times now.

I think their stats are screwed up. That or some luggage handlers have me on their "list".

I was finally reunited with my underwear, toothbrush and clothing late this morning. Went back to the airport to meet up with my coworker and found out that his flight was cancelled due to mechanical problems.

He's enroute now but won't be arriving for another 5 hours. So, he'll get in some time tonight around 10 pm. That means we're about 8 hours behind schedule. Because after he arrives, we have a 4 hour drive to Northern Michigan. And since we're crossing over timezones, we'll arrive at our hotel around 3 am. Just in time to unpack and get back up at 6 am for our morning meetings.

My car is back at the dealer. They're investigating the cause of the creaking sound in the back seat. *sigh* So they gave us a loaner car in the interim - a Z4.

Umm. Sporty convertible cars suck. They're tiny, have terrible visibility and you can feel every bump in the road. Me no likey.

As soon as we drove off the dealer lot, the boy yelled out "Road Trip!" What is it about rental or loaner cars that bring out the reckless, road warrior in all of us? Let's scratch it up, let's rack up a million miles, let's go off roading with it! Odd.

Speaking of road trips, I'm going on one in a few days. Northern Michigan. Well, getting there will be via plane but unfortunately, my clients are in the middle of nowhere. 4 hour drives daily for 5 days. What is up with that?! I need a raise.

So I have a spiffy new smart/pda phone. Here's a picture of an object on my desk at work. 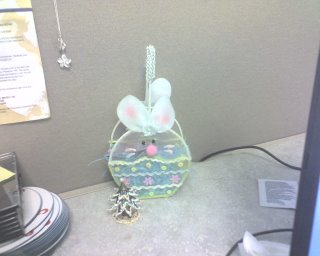 Put in a request for a picture and I'll upload it here... as long as it won't get me in trouble.

Update: Ocho requested that I take a picture of the deli/soup I get regularly. Well, I felt like bento today. No soup, Ocho. But this was yummier - chicken teriyaki with sushi, salad and miso soup. 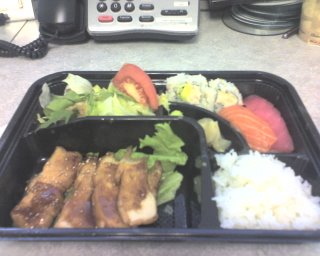 It tasted much better than it looks - the colors look faded and washed out here. I need a new phone!!

In a galaxy near, near to us ... one Lego obsessed husband walked into a toy store and pointed to the Imperial Star Destroyer.

“I WANT THAT ONE”, he said.
---
An hour later, back at home, a brief struggle ensued to see who would build it first. In the end, he won (but I would have my satisfaction).

Giddy with excitement, he cleared a space to begin his creation, nicknaming the dining room table "Lego Command Center One". Then he slowly opened the box and pulled out package after package of parts.

He rolled up his sleeves and went to work. Hours passed. A steady stream of grunts and the occasional  “Neato!” punctuated the silence. Slowly, the skeleton of the Imperial Star Destroyer took shape. 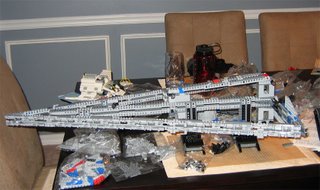 It was shortly after this that we realized a Truth. This thing is freaking HUGE! 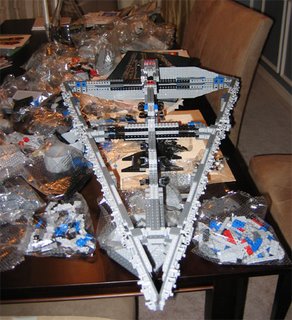 Once the framework was in place, James began the laborious task of building the plates that covered the top and bottom. This was divided in four sections. Here it is with the first plate mounted to the underside of the Destroyer.

Also note the giant thrusters. They elicited a "COOL" from the very pleased builder. 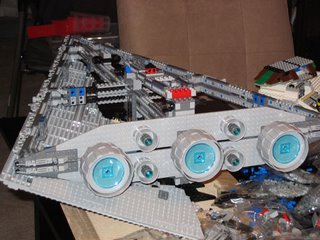 With the addition of the top plates, the sleek lines of the ship became immediately recognizable. 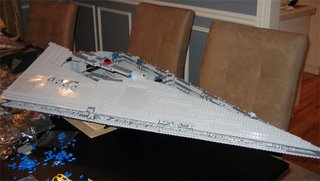 After days of intensive building, the boy wearily rose from his chair to take a break. "I'm going to play soccer!", he yelled and left Lego Command Center One. 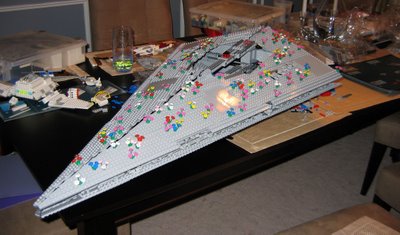 If you can't make out what those colorful dots are, here's a close-up. 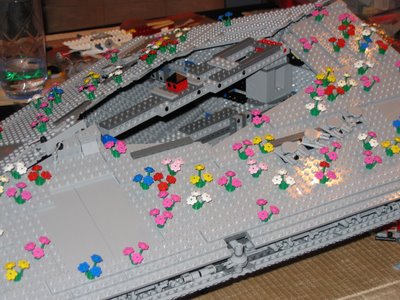 Despite solid arguments that this was in fact an IMPROVEMENT, he remained adamant that the Star Destroyer was not designed to be cute. Off came the flowers.

A week later, the end was in sight. The ship was moved to a new location, "Lego Docking Station Two" while he continued construction of the remaining pieces at the Command Center. 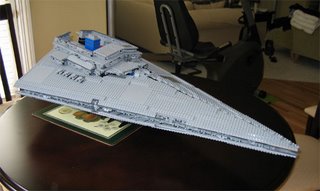 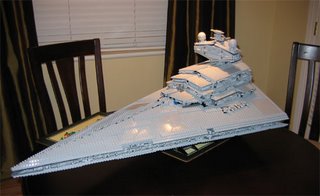 This ship takes up the full diameter of our kitchen table - which seats 4. To stay it's large is an understatement.

After seeing the tedious, repetitive steps necessary to build this thing, I've decided to take a pass on putting it together myself. At least for the next few months. I told him that we should at least put the Darth Vadar Lego minifig on the top of the ship, but all I heard was "blah blah, blah, not to scale, blah blah blah"
Posted by Toki at 7:52 PM 2 comments: